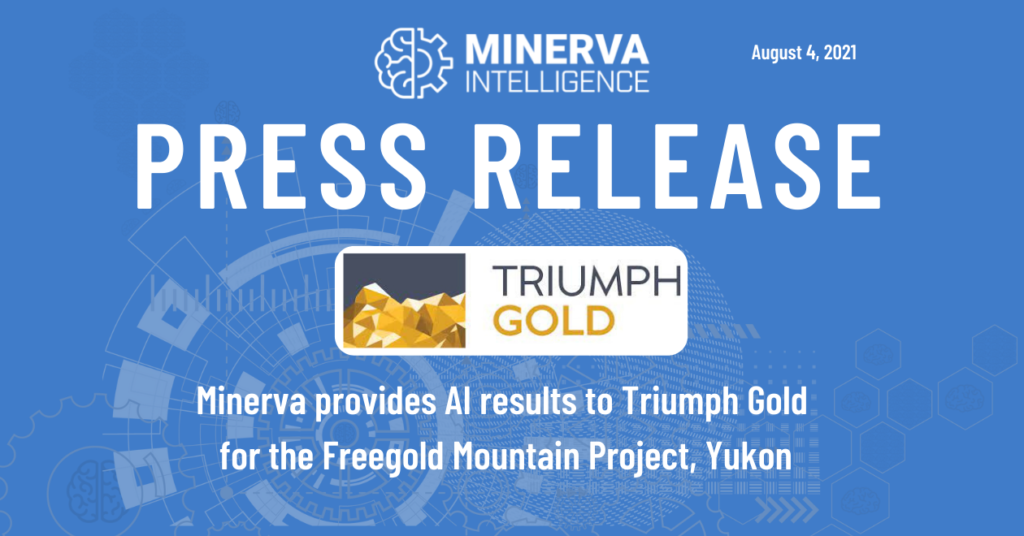 Results contributed to Triumph’s understanding of the complex geology and mineralization of the Nucleus and Revenue deposits, providing valuable information with which to guide plans for the next phase of evaluation of the extensive property. Results included:

John Anderson, Triumph Gold’s Interim CEO, Chairman and Director, was thrilled with the results. “DRIVER is like a silver bullet for exploration targeting,” said Anderson. “We saved hundreds of thousands of dollars using DRIVER to identify and verify a large number of exploration targets, giving us absolute confidence in our upcoming drill program.”

Minerva’s DRIVER software analyzed a comprehensive database of analytical results compiled from multiple generations of drilling on the Freegold Mountain Project, then delivered multiple wireframes models and preferred orientation data for each element. Data for two primary areas of interest, the Nucleus and Revenue deposit areas, were evaluated using DRIVER.

Nucleus is a focused deposit, having at least two steeply dipping dyke swarms, 1) generally east-west trending Quartz Feldspar Porphyry dykes, and 2) a northwest-southeast trending felsic dyke swarm. In addition, Leucogranite in the northern portion of the deposit area is present as southward projecting dykes and/or apophyses alternating with Schist.

Key outcomes for the Nucleus Deposit were in close agreement:

1) between DRIVER results, specifically the linear optimal orientation identified for gold, and the gold probability shell developed for the Resource Estimate, and

2) between the linear optimal orientation for gold and the spatially associated felsic dyke swarm as a dominant control on gold mineralization.

The gold probability shell delineated for the Resource Estimate is more rigorously defined than comparative DRIVER volumes. Although the respective volumes vary in detail, overall outlines defined by the 0.1 g/t shell are comparable, interpreted to suggest DRIVER volumes represent a cost-effective means to determine whether subsequent, more rigorously defined Resource Estimation is warranted. Furthermore, DRIVER output can be utilized to similarly evaluate other metals as potential co- and by-products on a semi-quantitative basis.

DRIVER results for the Revenue Deposit area are dominated by the high density of drilling in the eastern Revenue and western Blue Sky zones, spatially associated with the Blue Sky and WAu breccias. As a result, groups identified, and optimal orientations determined, tend to be localized in this area. Notable exceptions are groups identified along the southwest margin of the Revenue Zone, at the mutual boundary with the Guder Zone.

DRIVER results for Gold and Copper delineate the southern contact between Intrusive Tuff Breccia and Biotite Granodiorite, clearly defining areas recommended for subsequent evaluation. In addition, results are interpreted to indicate the northern contact may be similarly mineralized, but relatively under evaluated. This supports interpretation of K-means Cluster Analysis results, similarly interpreted to indicate mineral potential along the northern margin of the Revenue Zone. DRIVER results with respect to the Intrusive Tuff Breccia agree very well with Triumph’s lithological block model. On the basis of these results, very good mineral potential is interpreted along the entire southern contact, as well as to depth, representing a very good, although progressively deeper, drill target.

Minerva is able to deliver valuable insights (such as those above) through their proprietary DRIVER software, effectively identifying multi-element zones in drilling data that are typically too time-consuming and complicated to identify by conventional means. Multi-element zones identified through DRIVER can then be evaluated with respect to relevant lithologies and structures. A key outcome is that potential exploration vectors can be identified from a company’s exploration data relying on cost-effective computer reasoning. Minerva’s cognitive reasoning platform then compares identified elemental associations to hundreds of past and present mines throughout the world, identifying those most similar to a client’s targets, which can serve as reliable models upon which geologists can confidently develop their exploration and/or development strategies.

Potassium tends to be normal or depressed. Magnesium alteration is interpreted to be preferentially associated with Schist, having a low to very low content in Cluster 1 (dominated by Granitoids).

Lithologies within the Nucleus Deposit area have been subjected to a highly variable degree of potassic alteration, predominantly expressed as secondary sericite rather than alkali feldspar (“Kspar”) alteration. Alteration trends are also interpreted to indicate secondary plagioclase (predominantly Albite), largely independent of Kspar. These results are interpreted to be consistent with predominantly skarn-style metasomatism.

Results are interpreted to suggest Skarn, with closely associated Sulphide Zone mineralization, predominate in the Nucleus Deposit area. The cluster having the highest proportion of skarn has relatively few Sulphide Zone intervals, however, interpreted to represent more distal occurrences. More extensive skarn-style alteration is interpreted to be associated with a higher level of mineralization. Clusters 13 through 17 are of the most interest with respect to Ag and Au (as precious metals), together with Cu (strongly associated with the precious metals in these clusters).

Clusters 1 through 9 have a high number of anomalous values for Au and Cu, without accompanying Ag, interpreted to suggest a separate and distinct deposit style as they are dominated by “Granitoids” and Schist, as opposed to Skarn, lithologies.

Results for barium, calcium, potassium, and sodium have a very similar character, delineating highly localized and, potentially, focused alteration centres. The Blue Sky Porphyry area and the southern margin of the Intrusive Tuff Breccia (Revenue Zone), together with the Granger and Keirsten zones, document very high values for these elements, interpreted to reflect the effects of alteration. There is a subtle difference between barium and calcium, potassium and sodium, in that barium has a local high over an unnamed zone south of the Keirsten Zone, not evident for the other elements. In addition, barium and potassium document a larger areal footprint, interpreted as a potential halo to highly altered centres.

Arsenic, iron, and magnesium have a similar surface expression and document a larger areal footprint. The largest centre, together with the most extensive alteration, is associated with the Blue Sky Porphyry and contacts of Intrusive Tuff Breccia with host granites; Biotite Granodiorite along the southern margin of the Revenue Zone trending west to the Revenue West Zone, and Biotite Hornblende Quartz Monzonite to Granodiorite along the northeast margin of the Intrusive Tuff Breccia in the Revenue Zone.

Localized, slightly smaller (potentially underexplored) centres documenting interpreted high-grade alteration include the Granger, Keirsten and Revenue West, as well as unnamed centres south of the Keirsten Zone and east of the Revenue Camp, north of the Revenue Zone. Interpreted alteration evident at each of these centres is interpreted to be very focused, as there is little evidence of a gradational decrease into (a) lower grade halo(es).

Structural control, supported by a preferred east-west orientation for the Quartz Feldspar Porphyry dyke swarm and the long dimension for the ovoid-shaped exposure of the Intrusive Tuff Breccia, is evidenced by a preferred east-west trend evident in alteration centres. The Quartz Feldspar Porphyry dyke swarm is interpreted as a control on mineralization.

Strata in the Revenue Deposit area have been subjected to alkali alteration (Na depletion ± K addition). The dominant potassic phase is Muscovite, with only a small subset interpreted to indicate minor potassium feldspar (“Kspar”) alteration. Such alteration is considered consistent with the ‘Low Sulphidation’ deposit model proposed for the deposit area, with potential for subtle, highly subordinate Porphyry-style alteration.

Smaller centres are evident, to varying degrees, in Granger, Keirsten, and Revenue West, as well as two unnamed centres (south of Keirsten and east of the Revenue Camp/north of the Revenue Zone). Gold has the greatest distribution at surface, followed by Ag, Pb, and Zn. Copper has a slightly more restricted expression at surface over the deposit area.

A lower proportion of drilling in the southern Blue Sky Zone / Happy Creek Gold Showing area has documented a number of high-intensity mineralized intervals. In addition, a relatively small area of anomalous mineralization is present at the western margin of the Revenue Deposit area (adjacent to the Nucleus Deposit area). Both are considered worthy of follow-up evaluation.

More information on Minerva’s DRIVER can be found at https://minervaintelligence.com/DRIVER.

Rick Walker, M.Sc., PGeo, Senior Geologist for Minerva Intelligence, is a qualified person for the purposes of National Instrument 43-101.  Mr. Walker has reviewed and approved the technical content in this news release.

Minerva Intelligence Inc. is a knowledge engineering company based in Vancouver, Canada, with a subsidiary office in Darmstadt, Germany. Their proprietary evidence-based decision-making software applies the benefits of artificial intelligence technology to industries dependent on reasoning with complex technical and scientific data.

Currently, Minerva’s AI applications focus on earth science-related domains, including, but not limited to, natural hazards and mineral exploration; their technology has applications in diverse industries and domains.

Minerva’s common shares are currently listed on the TSX Venture Exchange (symbol MVAI). For further details, please refer to their website www.minervaintelligence.com or follow Minerva on Twitter or LinkedIn.

Triumph Gold Corp. is a Canadian-based, growth-oriented precious metals exploration and development company with a district-scale land package in mining-friendly Yukon. Triumph Gold is focused on creating value through the advancement of the district-scale Freegold Mountain Project located in the Dawson Range Gold Belt of Yukon, Canada.

About the Freegold Mountain Project

Triumph’s Freegold Mountain Project is located approximately 200 km northwest of the city of Whitehorse and 70 km northwest of Carmacks within the Dawson Range in southwestern Yukon. The project area covers highly prospective rocks along the Big Creek fault zone. The project is endowed with three significant mineral deposits, including the Nucleus Au deposit, Revenue Cu-Au-Mo-Ag deposit, and Tinta Hill polymetallic vein system, as well as numerous other gold showings.

This news release does not constitute an offer to sell or the solicitation of an offer to buy, nor shall there be any sale of these securities in any jurisdiction in which such offer, solicitation or sale would be unlawful prior to registration or qualification under the securities laws of such jurisdiction. The securities have not been and will not be registered under the United States Securities Act of 1933, as amended (the “U.S. Securities Act”), or any state securities laws and may not be offered or sold within the United States or to, or for the account or benefit of, “U.S. persons,” as such term is defined in Regulation S under the U.S. Securities Act, unless an exemption from such registration is available.