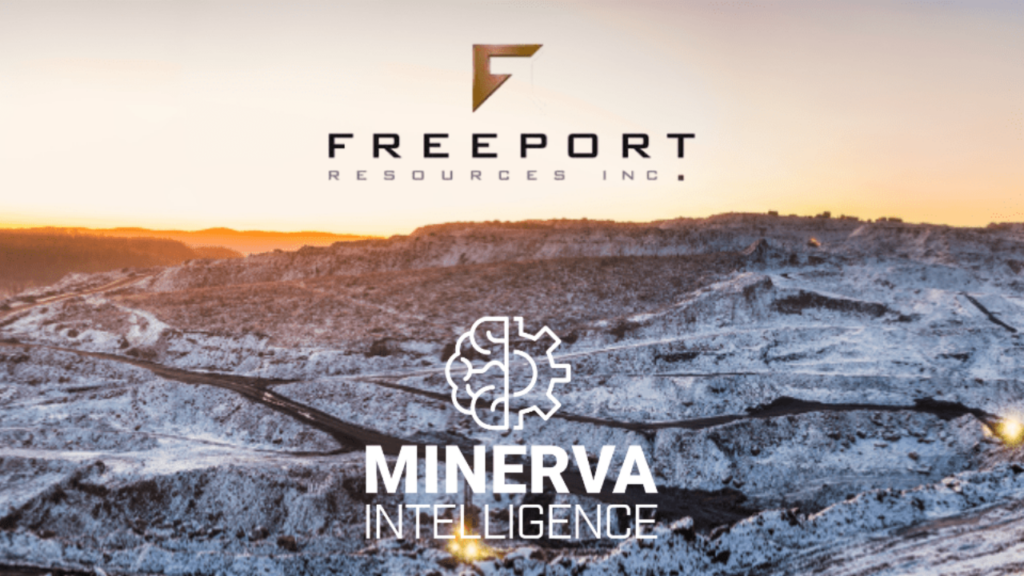 Freeport engaged Minerva to apply its cognitive AI-powered DRIVER technology to sub-surface geochemical data available for the Star Mountains project to enhance its next phases of surface and sub-surface evaluation of the extensive property, located 25 kilometres from the Ok Tedi mine in Papua New Guinea.

“We found Minerva’s analysis and the DRIVER system to be very useful to our understanding of the project,” said Gord Friesen, CEO of Freeport Resources. “DRIVER validated our geologists’ interpretation of the deposit zonation and gave indication of mineral potential beyond known resources on our properties and confirmed it in a fraction of the time. The synthesis of independent methodologies was a valuable contribution to the project and gave us confidence about the results.”

DRIVER and K-Means Cluster analyses were focused in the Olgal deposit area, utilizing geochemical analyses from 23 drillholes, for which a current inferred resource was previously determined. Results include, but are not limited to:

“We are thrilled to have the opportunity to work with Freeport in the exploration space, furthering our strategy of applying our technology to the mining and geohazard sectors,” said Scott Tillman, Chief Executive Officer of Minerva Intelligence. “Mining and exploration represent a significant opportunity for our technology to contribute meaningfully to the exploration process as well as with risk analysis, and this contract further validates our belief that there is a real need and demand for the valuable insights that Minerva’s solutions offer.”

DRIVER Evaluation
DRIVER delivers valuable insights from multi-element geochemical data through an exhaustive 3D evaluation of all elements present within a given database, not simply elements of direct economic interest. Comparable evaluation of such data has typically been prohibitively time-consuming and too complex for geologists to attempt.

Many of the DRIVER volumes examined at the Olgal deposit exhibit a prominent central pipe-like feature having a strong spatial association with Quartz Diorite and “Early Diorite”. This pipe-like feature is interpreted to represent a composite volume resulting from gold – copper intercepts hosted within quartz diorite and/or “Diorite 4’’ in drillholes 001OLG10, 002OLG10 and 014OLG12. As such, study results confirm previous interpretation of at least two dioritic intrusive phases (Quartz Diorite and “Early Diorite”). A separate and distinct molybdenum volume southeast of the core of the deposit area is interpreted to indicate a third diorite intrusion. The Olgal Deposit is interpreted to result from multi-phase intrusion of diorite at the contact between Derai Limestone and Leru Sediments. Study results also support interpretation of a mineralized copper and gold trend extending north-northwest from the Olgal Deposit. These results and interpretations independently validate similar interpretations by Freeport personnel.

K-Means Cluster Analysis
K-Means Cluster analysis was focused in the Olgal deposit area, utilizing geochemical analyses from 23 drillholes, for which a current inferred resource was previously determined (see below). Evaluation identified multiple mineralized subgroups of dioritic rocks and skarn as potentially significant for copper. These sub-groups are located at the core of the deposit area and well distributed from near surface to the basal thrust fault at depth. Two mineralized dioritic sub-groups for gold were identified.

Widespread presence of Derai Limestone in the project area, within which numerous occurrences of diorite intrusions have been documented, supports interpreted potential for Cu ± Au skarn-style mineralization.

Subsequent application of K-Means Cluster analysis to geochemical results from limited drill holes in the broader area around the Olgal Deposit identified multiple intercepts corresponding to the mineralized sub-groups described above. These results are interpreted to indicate that Futik, Ratatat and Kum Kom represent attractive targets for future evaluation.

Geophysics Reinterpretation
Available geophysics, dominated by various generations of magnetic data, with subordinate electromagnetic data, were also evaluated. Spatial association of strong magnetic anomalies with surface geochemical results are interpreted to indicate the Star Mountains project area has multiple targets having a signature similar to the Olgal Deposit and are, therefore, worthy of further evaluation.

Magnetic Inversion modeling identified a large volume underlying the Olgal Deposit, with the majority of the volume extending northwest. As such, geophysical results are interpreted to support potential for identification of additional sub-surface mineralization, extending northwest from Olgal, through Futik and beyond.

In addition, magnetic inversion results also document subsurface volumes spatially associated with Ratatat and Tuk. There are comparatively small (relative to the Olgal–Futik anomaly) sub-surface inversion volumes evident at Ratatat and Tuk, however only limited drill-hole results are available with which to evaluate sub-surface potential. Note: the detailed survey did not extend far enough north to cover Kum Kom and, therefore, there are no magnetic data available to assess potential at that locality. Results of magnetic inversion support results of K-Means Cluster analysis, interpreted to support further evaluation of these areas.

Significant Conclusions
Based on K-Means Cluster, DRIVER and 3D inversion results, potential to expand both grade and volume of copper ± gold porphyry-style mineralization is interpreted to exist at the core of the Olgal Deposit area, extending to the northwest. Infill drilling is recommended.

Extending drill holes 003OLG10 and 004OLG10 below the basal thrust fault are expected to return mineralized intercepts associated with an anomaly identified through 3D inversion of magnetic data, based on magnetic susceptibility results.

Mapped exposures of epidote alteration, marble, skarn and diorite, supported by trends interpreted from the results of both K-Means Cluster and DRIVER analysis, together with a large sub-surface volume delineated by magnetic inversion, are interpreted to indicate strong potential for identification of additional porphyry-style mineralization extending from the Olgal Deposit northwest to Futik and beyond.

Limited drilling at Futik, Ratatat, Pad 48 and Tuk is interpreted to have tested the margins of their respective target anomalies, particularly those defined by 3D inversion of magnetic data, with holes either collared too far laterally and/or not drilled deep enough. Further evaluation is strongly recommended.

“We are beginning to see a significant growth in demand for our innovative solutions from forward-thinking companies such as Freeport, actively applying new technologies that make their workflow processes more efficient and insightful,” said Scott Tillman, Chief Executive Officer of Minerva Intelligence. “The Star Mountains project clearly demonstrates the value Minerva’s AI technology offers to the mining and explorations sectors, and we are proud to have been able to provide deep, actionable insights through comprehensive evaluation of Freeport’s geochemical data to identify promising new drilling targets for further evaluation.”

Rick Walker, M.Sc., PGeo, Senior Geologist for Minerva Intelligence, is a qualified person for the purposes of National Instrument 43-101.  Mr. Walker has reviewed and approved the technical content in this news release.

A summary report prepared by Minerva can be found on the Freeport website at www.freeportresources.com.

About Minerva Intelligence Inc.
Minerva Intelligence Inc. is a knowledge engineering company based in Vancouver, Canada, with a subsidiary office in Darmstadt, Germany. Their proprietary evidence-based, decision-making software applies the benefits of artificial intelligence technology to industries dependent on reasoning with complex technical and scientific data.Currently, Minerva’s AI applications focus on earth science-related domains, including, but not limited to, natural hazards and mineral exploration; their technology has applications in diverse industries and domains.

Minerva’s common shares are currently listed on the TSX Venture Exchange (symbol MVAI). For further details, please refer to their website www.minervaintelligence.com or follow Minerva on Twitter or LinkedIn.

About Papua New Guinea
Papua New Guinea (PNG) is a country that occupies the eastern half of the island of New Guinea in the southwestern Pacific Ocean. PNG is richly endowed with mineral resources, and the geological arc spanning the island is home to some of the world’s largest gold and copper mines/projects including Grasberg, Porgera, Frieda River, Ok Tedi, Ramu and Lihir. PNG is considered a stable and mining-friendly jurisdiction and presents tremendous exploration potential.