Hope, a Gateway to Climate Risk 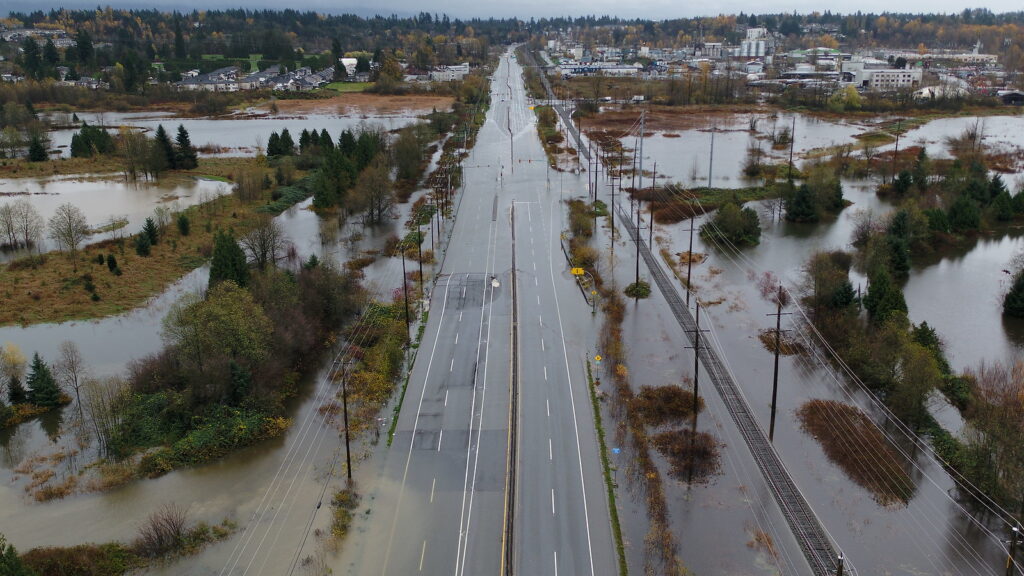 Yesterday morning I woke up to the sound of a PA crackling on: “Hello folks! I want to thank you for your patience during what will be the most extreme natural hazard you will ever experience.”

The RCMP officer was addressing me and the hundreds of others who had spent the night at Hope Secondary School. The high school is functioning as an emergency shelter for those of us who are trapped here in the town. Hope, known as the gateway to British Columbia’s Interior, where five highways converge, connects the Lower Mainland and the rest of British Columbia. But on Sunday night an extreme rainfall event caused debris flows and flooding on a mass scale that resulted in every single one of those highways being wiped out, blocked or flooded. Those sitting around me on the high school gym floor might have thought what the officer said was extreme, but I think he is underestimating what is in our future.

This has been without a doubt the most extreme natural hazard I have ever experienced.

Whole sections of highway were washed away, the entire town of Merrit is underwater, communities all over the province are displaced, without power, or have been cut off from already challenged global supply chains. I am indeed fortunate that my partner, myself and our cat, Boomer, are well-prepared with blankets, freeze-dried food and a full tank of gas in our truck.

Unfortunately, this is not the most extreme natural hazard event we will experience in our lifetimes.

Climate change is increasing the likelihood of natural disasters. And here in coastal British Columbia, we are at risk to a whole host of climate-related risks. I am currently experiencing first-hand what flooding and landslides can do, but there are also coastal hazards brought on by rising sea levels and storm surges brought on by increased extreme wind events. All of this does not even factor in “The Big One” a devastating earthquake that many experts believe is overdue in the Pacific Northwest.

This particular crisis began on November 14, 2021, when the Pacific Northwest was hit by an “atmospheric river,” a large (thousands of km long and hundreds of km wide) mass of moist air that originated in the Pacific Ocean. When this mass of moist air hit the Coast Mountains, the air cooled and lost the capacity to transport moisture, releasing a huge amount of precipitation. Most of the precipitation occurred as rain, causing rainfall up to 250 mm in a day in Hope… as much as usually falls here in a month. The mountain slopes quickly became saturated, and soil and sediment started to lose cohesion, causing powerful landslides that breached infrastructure at multiple locations. At the same time, so much water filled rivers that their banks eroded, destroying bridges and flooding the surrounding land. The combination of landslides and flooding blocked and destroyed highways, trapping people and isolating Vancouver and the surrounding communities from the rest of Canada.

Even if it is too early for a full understanding of the event, recent studies have shown the effect climate change is having on precipitation patterns in the Pacific Northwest. Warmer temperatures mean more precipitation will occur as rain as opposed to snow, which doesn’t have the immediate saturating effect of rain. Curry et al 2019 states “The CMIP5-VIC (the climate model N.D.R.) simulations display decreasing snowfall and increasing rainfall throughout the 21st century, especially in autumn[…]. The largest rainfall increases are seen in October through January, with peak increases of 62 mm (110%) in November and 44 mm (137%) in December from the 1990s to the 2080s. Significant changes in extreme rainfall also occur.” This means that we will be experiencing more flooding in the fall, and that our landscape may not be ready for it.

Another factor that may have played a role in this catastrophic watershed response to the atmospheric river is that some of the affected slopes were also hit by wildfires this past summer, removing the forest’s protective layer and baking the soil, reducing its capacity to absorb water.

As I was passing the time through the torrential downpour (playing backgammon and answering emails on a wi-fi signal that felt akin to dial-up), I wasn’t thinking about the future of our climate, or fearing for the worst; I was amazed by the resiliency and generosity of the people around me. Everyone wanted to help each other out, making sure that everyone who was trapped had food, while the entire town was out of power and no stores were open. Individuals were pooling funds to charter helicopters for mothers and young children, river-fishing guides were running boats up the river to take people back to their homes.

Over the past three years I’ve been working with a talented team of engineers, software developers and geoscientists to build technology that can help our communities and our economy be better prepared for natural hazards like the one I am living through right now. We build systems that help identify areas and even specific buildings or infrastructure that are prone to landslides, flooding, and other natural events that are increasing in severity and frequency due to climate change. My experience this week has shown me first-hand the crucial importance of preparing for what is surely coming and made me confident that the work I am doing is relevant. It can save lives, protect homes, and build a more resilient economy.

As I conclude this essay, we have finally made it home safe and sound. Highway 7 was cleared to allow one-way traffic out of Hope and we were able to drive through the wreckage of two different landslides, making it back to Vancouver more than 72 hours after we arrived in Hope.

I think that we can take a tragedy like this and learn that not only our governments but homeowners and businesses need to better understand what risks they face so that we can collectively be more prepared when the next, possibly worse, natural disaster comes. If we can come together, working so hard to keep each other fed, warm, and safe during these disasters, we can surely put in the effort to understand the risks we face.