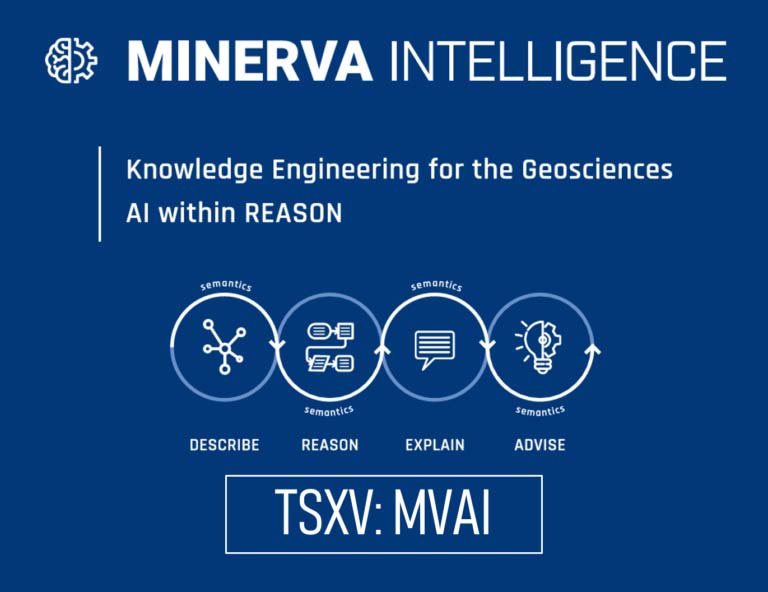 Vancouver, British Columbia, May 28, 2019 – Minerva Intelligence Inc. (formerly Two Owls Ventures Corp.) (TSXV: MVAI) (the “Company”), is pleased to announce that, further to its news releases dated November 8, 2018 and April 4, 2019, it has closed its arm’s length Qualifying Transaction (“QT”), being the acquisition of all of the outstanding shares of Minerva Intelligence (Canada) Ltd. (“Minerva”) from the former holders thereof, in exchange for shares of the Company.

It is expected that on or about June 5, 2019, the Company’s common shares will commence trading on the Exchange as a Tier 2 technology issuer under the symbol “MVAI”.

Pursuant to a Plan of Arrangement and Arrangement Agreement (the “Arrangement”), the following has been completed:

(b)  the Company changed its name to “Minerva Intelligence Inc.”;

(c)  Minerva continued its jurisdiction of incorporation from Ontario to British Columbia, to become subject to the B.C. Business Corporations Act (“BCBCA”);

(d)  Minerva amalgamated with 1198574 B.C. Ltd. (a wholly owned subsidiary of the Company) and continued as “Minerva Intelligence (Canada) Ltd.” under the BCBCA;

(e)  the Company issued an aggregate of 38,575,005 post-consolidated shares in exchange for all of the outstanding shares of Minerva;

(f)  the Company also issued (i) 1,000,000 post-consolidated shares as a finder’s fee, and (ii) a total of 1,950,000 stock options in replacement of outstanding options in the capital of Minerva, each new option entitling the holder to acquire one share of the Company at the exercise price of $0.2534 per share; and

(g)  Minerva became a wholly-owned subsidiary of the Company.

Minerva is in the business of developing and marketing artificial intelligent (AI) software products.  Minerva’s AI systems combine human expertise (e.g., mineral exploration) with vast amounts of information from public and private databases in a cognitive computer reasoning system to carry out complex tasks faster and more thoroughly than can be done by human beings.  One of its first AI software products focuses on enhancing the success rate of minerals exploration.  Although mineral deposits are rare and complex with many different attributes, more than 100 years of scientific research has produced many powerful models used to predict where mineral deposits are most likely to occur.  Minerva’s AI system combines the power of human knowledge and experience with computer speed and reasoning to streamline mineral discovery.

Minerva initially applied its AI platform to minerals exploration, but it can be used in other industries, such as environmental protection, geohazards, land use planning, insurance and healthcare. Minerva’s AI platform will be available as a software-as-a-service (SaaS) application. Its first of three products for the mineral exploration industry, the www.yukonmineraltargets.com website, was launched in early 2019 and it is also currently developing applications for the geohazards and insurance industries to be released in the near-term.

A total of 12,766,675 common shares will be subject to escrow restrictions, including 1,100,000 shares originally issued to the Company’s principals upon listing the Company as a CPC, and 11,666,675 shares issued to new principals and others in connection with the QT.  All escrowed shares will be released from escrow as to 10% on listing, and an additional 15% every six months thereafter over 36 months.

The Company’s new board of directors and officers are:

Mr. Smyth is a geologist and software developer with 40 years of experience in minerals exploration, resource evaluation and mining, 25 of those with one of the largest mining companies in the world.  He began his career as a De Beers Consolidated Mines student at the University of Cape Town in 1974, moving to the Anglo American Corporation of South Africa with a BSc (Hons) in geochemistry in 1978.  He served Anglo American in diverse roles throughout Africa and Australasia.  In 1985 he was sent by Anglo American to Imperial College, London, to study artificial intelligence applications in geology, and in 1996 he moved to Singapore to establish Anglo American’s exploration presence in that region.  During his career with Anglo American, he held various responsibilities in exploration geochemistry, resource evaluation, software development and corporate management.  Mr. Smyth and his team discovered the Buzwagi deposit in Tanzania in 1996; the Boyongan Cu-Au porphyry deposit in the Philippines in 1999; and GT Gold Corp’s Saddle Gold Project in British Columbia’s Golden Triangle in 2014.

In 2000, as Vice President (Exploration) in Johannesburg, he resigned from Anglo American and co-founded Georeference Online Ltd (“Georeference”).  Georeference provided consulting services to the minerals exploration and mining industry and develops software applications for mineral exploration and the earth sciences in general.  In 2017 Minerva purchased Georeference’s artificial intelligence software and intellectual property, and appointed Mr. Smyth as its CEO.

Mr. Jenkins, BA, CPA, CGA, has broad experience in accounting, banking, securities regulation and corporate finance.  He has served as the CFO for a number of Vancouver mining exploration and development companies, most recently Evolving Gold Corporation.  He also has experience as the CFO of technology companies and a company in the natural foods industry.  Prior to his involvement with public companies he worked in corporate finance with brokerage houses in Vancouver and Calgary.

Mr. Elliott is founder of F3 Capital Management LLC, an independent alternative asset management and advisory firm.  In addition, he was a co-founder and is non-executive Chairman of Minds + Machines Group Limited, an AIM-listed technology company.  Mr. Elliott is a former director of GCM Resources Plc, an AIM-listed natural resource company.  He has a BSc in Economics from the London School of Economics.

Mr. Mackworth is a Professor of Computer Science at the University of British Columbia.  He was educated at Toronto (B.A.Sc.), Harvard (A.M.) and Sussex (D.Phil.).  He works on constraint-based artificial intelligence with applications in vision, robotics, situated agents, assistive technology and sustainability.  He has authored over 130 papers and co-authored two books: Computational Intelligence: A Logical Approach (1998); and Artificial Intelligence: Foundations of Computational Agents (2010; 2nd Ed. 2017).  He was the founding Director of the UBC Laboratory for Computational Intelligence and the UBC Centre for AI Decision-making and Action (CAIDA).  He has served as the President of International Joint Conferences on Artificial Intelligence Inc. (IJCAI Inc.), the Association for the Advancement of Artificial Intelligence Inc. (AAAI) and the Canadian Association for Artificial Intelligence (CAIAC) managing their executive boards.  He is a Fellow of AAAI, CAIAC and the Royal Society of Canada.  From 2014 to 2018 he served the non-profit AGE-WELL (Canada’s network of aging and technology research) as the Chair of its International Scientific Advisory Committee, as a Director on its Board and as an Executive Committee member, co-managing an annual budget of around $8M.

For further information concerning the Company, Minerva, and its business, please refer to the Company’s Filing Statement dated March 28, 2019 as filed on SEDAR on April 1, 2019.

CAUTIONARY STATEMENT REGARDING FORWARD-LOOKING INFORMATION: This news release includes certain “forward-looking statements” under applicable Canadian securities legislation.  Forward-looking statements include, but are not limited to, statements with respect to: the business strategy and objectives of the Company and Minerva and the release of future products. Forward-looking statements are necessarily based upon a number of estimates and assumptions that, while considered reasonable, are subject to known and unknown risks, uncertainties, and other factors which may cause the actual results and future events to differ materially from those expressed or implied by such forward-looking statements.  Although the Company has attempted to identify important factors that could cause actual actions, events or results to differ materially from those described in forward-looking statements, there may be other factors that cause actions, events or results not to be as anticipated, estimated or intended.  Known and unknown factors include, but are not limited to, changes in national and local government legislation, taxation, controls, regulations and political or economic developments or conditions in countries in which the Company may carry on business; business opportunities that may be presented to, or pursued by the Company; operating  or technical difficulties in  connection  with  business activities; the possibility of cost overruns or unanticipated expenses; employee relations; the risks of obtaining and renewing necessary licenses and permits; the Company may require additional funds in order to develop and market its technology, as well as for general working capital and will be reliant on the sale of equity or debt securities for such funds; there can be no assurance the Company will be able to obtain such funds and as a result, the Company may not be able to advance its business plan or make further acquisitions or continue operations; there is no assurance the Company will be able to obtain insurance for its operations; product liability exposure; the Company’s directors and officers serve on the boards and as officers of other companies whose interests may conflict with the Company; there may not be an active or liquid market for the Company’s shares; the Company may never pay any dividends; intensifying competition resulting from established competitors and new entrants in the businesses in which the Company operates; potential for litigation;  fluctuations in total customers; technological change and obsolescence; loss of services of key senior management personnel; privacy laws; unpredictability and volatility of the price of the Company’s securities; and dilution. Further risks include limited operating history; protection of intellectual property rights; reliance on computer systems; reliance on management; delays in the development of projects; and other risks set out in the Company’s public documents filed on SEDAR. This list is not exhaustive of factors that may affect any of the forward-looking information.  There can be no assurance that such statements will prove to be accurate, as actual results and future events could differ materially from those anticipated in such statements. There is further no assurance that the Company will be successful in developing, commercializing or profitably operating its new business in the manner described.  Accordingly, readers should not place undue reliance on forward-looking statements.  The Company disclaims any intention or obligation to update or revise any forward-looking statements, whether as a result of new information, future events or otherwise, except as required by law.